Saturday, 17/03/2018, was the day for another PyDelhi meetup. A day for tech lovers to come together and learn from each other.

The venue of the meetup was again Fueled, Noida. Rajat and Gourav came to the stage and started the meetup with the introductions. Since in every meetup there are people who are coming for the first time, it’s good to start with introductions. One by one, everybody, including the hosts and the audience, gave a brief introduction about themselves.

In the introduction session, Rajat and Gourav also shared some useful information about the PyDelhi. Like about the PyDelhi Volunteer Group on Telegram (which you can join here) and the fact that PyDelhi is one of the organizers of PyCon India 2018.

After introductions, it was time for the Talk Session and the first talk was given by TK Saurabh on logging in python. The talk highlighted the basic features of Logging and why we should consider it over print statement debugging.

He discussed various techniques and methods that are available in the python logging module in the std lib. Including implementation/demo of the sample application with logging.

TK talked about the different logging levels, Loggers and LogRecords, Handlers and Formatters. He also talked about the ways to configure logging manually or by using File Config or DictConfig. The code for the above talk is pushed.

It was snack break after the first talk, and when everybody was done with their Samosas, we started with the second talk – Github for Noobs by Aniket. It was a very basic tutorial on how to use version control management service through Git and Github to maintain your code. The talk explained basic features of Git. Note:Git and Github are two different things not to be confused with each other.

In order to explain the whole thing, Aniket demonstrated how to push a simple commit into an empty repository with a few commands:

Here’s what each line of code is doing: - The first line creates an empty repository into your project directory. - The second line acts as a pointer for your Git directory to your repository on Github/GitLab/whatever the link to which is defined by the origin. - The third line stages all your changes for the commit. - The fourth line commits your changes into the Git file with a description "init" for initialize. - The last line pushes your commits or changes into your repository.

Then Gourav announced the lightning Talk Session. Amongst others, there was a lightening talk which was not related to python or anything technical for that matter. The talk was given by Anuvrat on touch typing, i.e. typing with all your fingers without looking at the keyboard. 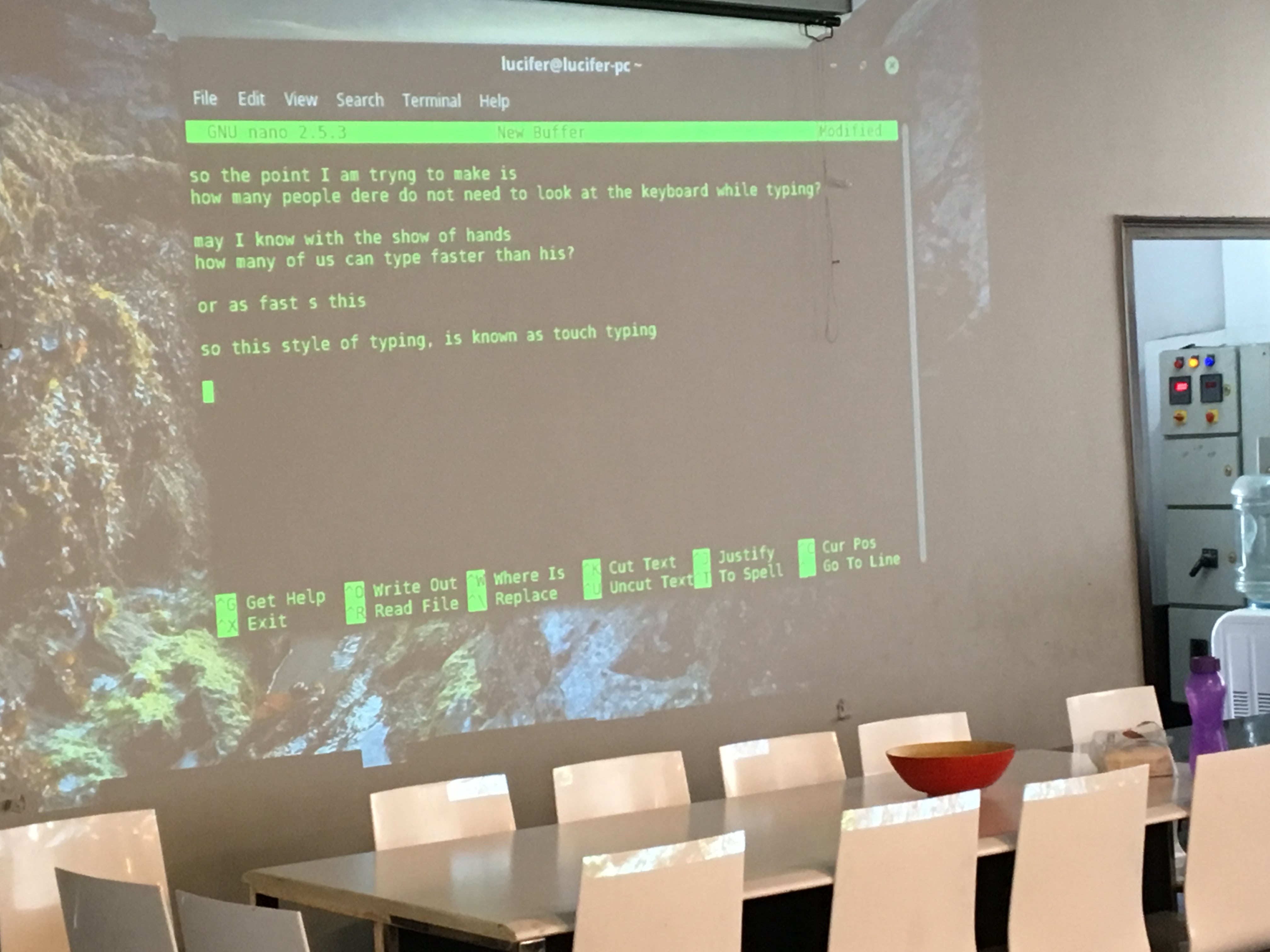 The talk started with two-sided verbal communication between the speaker and the audience. But gradually speaker started to type, which was being projected on the screen, and stopped talking entirely. As you can see in the picture above. Speaker was communicating with the audience through typed text and showing what is it like to do touch typing. Do you think we can even call it a ‘talk’ anymore? Never mind!

As always, it was pitching session at the end. Where people can let everyone know about the thing that they are looking for. You can subscribe to the mailing list in case you want to check out all the pitches.

That was all for the day. Another PyDelhi meetup got concluded successfully. I hope you have enjoyed it and would join us at the next meetup.